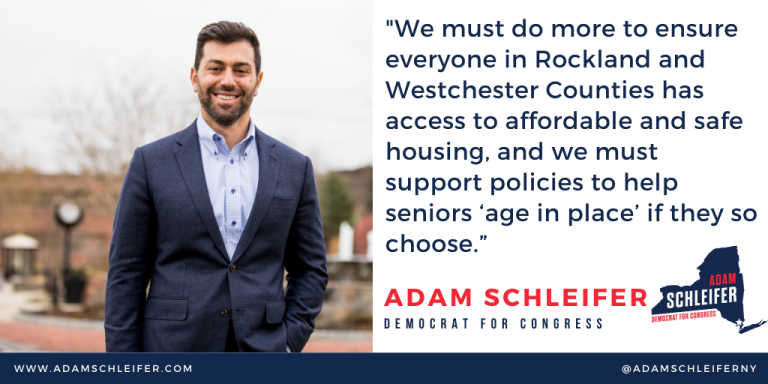 Schleifer: “We must do more to ensure everyone in Rockland and Westchester Counties has access to affordable and safe housing, and we must support policies to help seniors ‘age in place’ if they so choose”

White Plains, NY – Adam P. Schleifer, a Democratic Candidate for U.S. Congress in New York’s 17th District, released his housing plan to make housing more affordable and accessible for all residents in Westchester and Rockland Counties. Schleifer’s plan would increase investments in programs that fund the construction and rehabilitation of housing units for low- and middle-income families. It calls for funding federal rental assistance programs like housing vouchers and Section 8 so that all eligible residents would be able to receive them. Additionally, Schleifer commits to following in Congresswoman Nita Lowey’s footsteps through federal investment in the Community Development Block Grant, which funds important rehabilitation projects that can protect our children and seniors from public health threats. Finally, Schleifer would target funding to individuals living in communities that have been undermined by federal housing policies of the past, like redlining.

“We must do more to ensure everyone in Rockland and Westchester Counties has access to affordable and safe housing,” said Schleifer. “If we do not act now to lower housing costs for residents of Rockland and Westchester Counties, we are at risk of pricing people out of their homes and leaving working families to fend for themselves in the wake of the COVID pandemic.”

Rockland and Westchester Counties have become expensive for many middle- and low-income families over the past twenty years. Schleifer notes that from 2013-2017, Rockland County had the largest portion (59.4 percent) of rental households paying more than 30 percent of their income on housing costs. In Westchester County, a report published last year found that more than 40 percent of Westchester County residents spend more than 30 percent of their household income on housing. The unaffordable housing market has also pushed young people out of the district. Between 2000 and 2017, the population of 30- to 44-year-olds declined almost 19 percent, while nationally, that same age group grew by 2.1 percent over the same time.

Schleifer’s plan aims to lower housing costs by expanding the supply of housing stock and providing resources to low-income individuals struggling to make ends meet. Schleifer would increase funding for the National Housing Trust, a fund developed under the Obama Administration that creates affordable housing units for extremely low-income households. Schleifer’s plan also increases funding for federal tax policy incentives, like the Low-Income Housing Tax credit, to construct and rehabilitate more affordable private housing for both those near the poverty line as well as the middle class. Finally, Schleifer would fund the Department of Housing and Urban Development so that local housing authorities and those eligible for and dependent on federal rental assistance, including housing vouchers and Section 8 rental assistance, received sufficient funding. As of 2017, funding limitations have prevented 3 out of 4 eligible recipients from getting the federal housing funding they deserve, further exacerbating housing and homelessness crises in many communities across the country.

Schleifer would also build upon the work of Congresswoman Nita Lowey by securing more funding for housing rehabilitation and safety improvements through programs like the Community Development Block Grant (CDBG). Schleifer applauds Congresswoman Lowey’s recent procurement of more than $3.6 million of CDBG funds through the Coronavirus Aid, Relief, and Economic Security (CARES) Act for Rockland and Westchester Counties to make critical housing upgrades, especially for seniors, veterans, the disabled, and low-income families. This funding comes at a critical time. COVID-19 has highlighted how vulnerable seniors in long-term care facilities are to residing in such close proximity with one another during a global pandemic. Moreover, in Westchester County alone, 81% of housing units were built before 1979, the year that lead-based paint was no longer used in homes, posing an immediate risk to children living in these units. Under Schleifer’s plan, federal CDBG funding would be directed to make these important upgrades and inoculate our seniors and children from any threats to public health.

Finally, Schleifer seeks to direct resources to communities that traditionally have been excluded from accessing mortgages and other forms of capital. Schleifer’s plan supports creating a down-payment assistance program for any low-income individual living in a formerly-redlined neighborhood as a means of promoting home-ownership and building wealth. Additionally his plan calls for better enforcement of the Community Reinvestment Act, which requires federal regulators to evaluate how well local banks and financial institutions are meeting the credit needs of low- and middle-income families.

Adam Schleifer, 38, graduated from Chappaqua’s public schools in 1999 and went on to attend Cornell University and Columbia University Law School, where he served as a Senior & Staff Development Editor on the Columbia Law Review. After graduating from law school, Schleifer served two years as a federal law clerk, first in the United States District Court for the Southern District of New York, and then in the United States Court of Appeals for the Ninth Circuit.

Schleifer then built a career at one of the nation’s leading law firms before reentering public service, first as a New York State consumer-protection regulator, and then as an Assistant United States Attorney. Schleifer has prosecuted regulatory and federal-criminal actions against predatory payday and subprime auto lenders; taken dangerous and illegal weapons out of communities; prosecuted crimes of sexual violence and predation; and protected our clean air by prosecuting a conspiracy to violate the Clean Air Act. Adam Schleifer and his wife, Nicole, are residents of New Castle.